December 10, 2018
It was long overdue. According to ETNews, Korean Air (KE), a Skyteam member, will bring In-Flight Connectivity (IFC) to their fleets starting next year.

KE once adopted IFC more than a decade ago, with Boeing's Connexion By Boeing (CBB) Service, but as we all know CBB had failed. Ever since, KE was reluctant to adopt IFC, saying Korean people would dislike such a slower internet, as they are used to lightning-fast internet on the ground. Although it sounds weird, as a Korean, I could have agreed with them a few years ago; not anymore, as Gogo 2Ku or ViaSat solutions exhibit decent speeds.

As the article specifically mentions retrofitting, KE is likely to support IFC on their current fleets as well as the newer ones. They have 30 737 MAXs and 30 A321neos on order, and the article says 6 of the 737 MAXs will be delievered next year. It would be safe to assume that the newer airplanes may have the Wi-Fi pre-installed. They don't really have new widebody aircraft on order (literally one more 787 is left), so they might order more soon. Which means their longhaul international flights will not have Wi-Fi for a while, unless KE retrofits their fleets aggressively.

It is predicted that KE will implement in-flight Wi-Fi solutions from Gogo, which Delta Air Lines (DL) uses for their newer fleets. KE and DL currently operate a transpacific metal-neutral joint venture, so Gogo seems a good candidate. Their 2Ku product is superb and probably the fastest among longhaul international IFC. Inmarsat GX is fast enough but not as superb as 2Ku or ViaSat, and ViaSat cannot be used over the Pacific. Its rival (albeit being much smaller) Asiana Airlines, a Star Alliance member, already has Wi-Fi on their A350 fleets but relies on somewhat slower Panasonic IFC solution. (Meanwhile, Asiana A350 Wi-Fi seemed to be faster than other Panasonic solutions according to my speedtest.)

I really hope KE to retrofit their fleets at a fast pace and to have more Wi-Fi-enabled fleets (especially widebodies) than Asiana, which will only have 10 airplanes with Wi-Fi at the end of 2019. But I am doubtful about it. 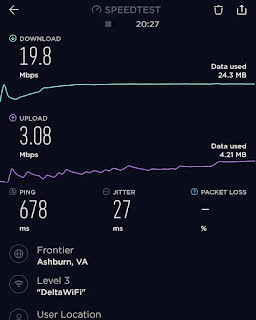 Speedtest: Left is from Gogo 2Ku on Delta flight and right is from Panasonic on Asiana flight.

July 02, 2018
This is not a story about Ryanair or Spirit. You are supposed to starve when flying those airlines. But you would normally expect a good meal on Asiana flight. Not anymore. Asiana Airlines is facing a massive in-flight meal crisis (link in English) since July 1st. Basically, numerous planes are flying with limited or no meals, and with significant delays as they need to wait for the meals to arrive (if lucky). On July 1st, 36 flights did not have meals and 51 flights were delayed, out of the 80 flights. Yesterday it got better; 18 out of 75 flights forced passengers to starve. This includes some of the longhaul flights; OZ541 flight from ICN to FRA did not have a second meal, even for the business class. And this flight lasts 11 hours. Even the pilot and flight attendant meals are not available, so the pilots are instead eating instant cup noodles . The FAs are giving up their cup noodles for the passengers. Why this happened? So on July 1st, Asiana changed their catering compa
Read more

Disclaimer: I am not an Asiana Airlines employee, and I am by no means related to the company. I do not have an access to the Asiana Airlines Blind, nor insider information; I just compiled what has been reported in Korean. Koreans were infuriated after the Asiana Airlines cabin crews accused Park Sam-koo, the chairman of Kumho Asiana group (which includes Asiana Airlines) of sexual harassment. The news was not very known outside Korea, so I tagged popular bloggers such as Lucky at One Mile at a Time and Gary at View from the Wing with a link to the only English article at the time. I would like to thank Lucky and Gary for covering this, but apparently something was lost in translation, as some people genuinely do not understand why "forced handshake" constitutes sexual harassment. (Of course some people were indeed outright misogynists, but for others I'll give them the benefit of the doubt.) So I decided to report their accusation with more direct translation to hel
Read more